President Obama signed into law a bipartisan budget bill on Monday November 2, 2015.  This bill will not only avoid a U.S. debt default and fund the government through 2017, but this bill also makes major changes to the Social Security system.  The new bill will close some unintended loopholes in the Social Security System.

The main loophole that is going to close is the file and suspend/restricted application strategy.  Now, in order for a spouse/dependent child to claim benefits based on your earnings record, you must be receiving your benefits.  Therefore, you cannot file for your benefits, suspend them, and accrue delayed retirement credits all while allowing your spouse/dependent child to collect benefits.  This provision is set to take effect on May 1, 2016.  Therefore, if you are currently receiving spousal/dependent child benefits based on a spouse/parents benefits that are currently suspended, you can expect these checks to stop in 6 months unless they remove this suspension from their benefits.

Another major change deals with the infamous restricted application claiming strategy.  Before the new budget bill, you could file an application for spousal benefits only if you were at least your Full Retirement Age (FRA).  This option will no longer be available to anyone who is younger than 62 on December 31, 2015.

Click on the image below to read more about the changes to the Social Security system and who will be affected by those changes. 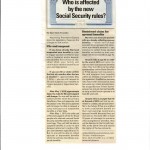 Click here to respond to one of our blog posts by sending us a message.